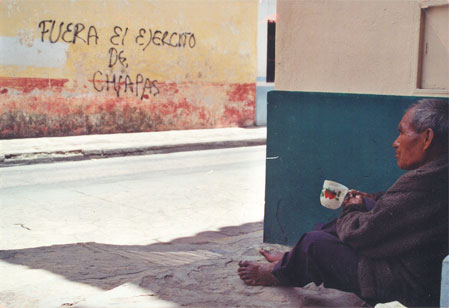 In 1999, Niki Karsin (Oakwood School ’90) had been working within indigenous (Mayan) communities in Chiapas, Mexico, since shortly after the Zapatista uprising of January 1, 1994. One major project was to help establish a federation of women’s artisan cooperatives, so that scarce resources might be shared and women working together might help each other to develop confidence and independence. But to find a fair market for their products in Chiapas was not possible: the local population was too poor, and the existing import-export options were notoriously exploitative.

Students and faculty in Oakwood School (Los Angeles, California) were excited to help, as was the Esperanza Community Housing Corporation, a non-profit which was just completing the construction of its Mercado La Paloma in Los Angeles – where the women’s goods could be made available to both anglos and latinos. The first delegation to Chiapas, in June 2000, was primarily to develop the personal trust necessary to this relationship, and to make decisions together about the practicalities of the work.

Since then, Oakwood students have raised over one million dollars in donations for the artisan work of the Women of Corn in Resistance (as they named themselves during that first delegation) – all of which has gone directly to the women — and over 300 students and faculty have been part of the annual June delegations. The delegations cover a lot of ground, intellectually and morally and spiritually, and a lot is learned, in many different ways. In particular, the openness and commitment of the Women of Corn to these students has grown and deepened steadily: students are regarded mainly as co-workers, rather than kind-hearted and sympathetic tourists. The experiences together have been profoundly significant, for everyone.

As Oakwood students entered college, many felt a strong need to continue this work. In 2003, an ambitious University Project was begun, building on relationships established by the delegations with three major centers of cooperative artisan work in Chiapas.

Here are writings and photographs by those involved in this work, both the women of Chiapas and American students whose lives have become connected to theirs.