My Experience in Chiapas

“Culture is like a tree. If the green branches-a people’s language, legends, customs- are carelessly chopped off, then the roots that bind people to their place and to each other also begins to wither. The wind and rain and the elements carry the topsoil away; the land becomes desert.”

My experience working with women’s cooperatives in Chiapas, Mexico was an eye-opening and inspiring event in my life. During the six-day trip, the hopes and aspirations of the indigenous women became tangible to me. I came to admire the ideals and conviction that these women fight for and believe in. In the face of oppression, their purpose was clear and their dignity was unprecedented in anything that I have ever seen in my life.

The women had come from nine different villages. Most of them spoke indigenous languages and not Spanish. They journeyed from their villages in the jungles to the city of San Cristobal, where my teacher and I were staying. They came by foot; and some of them had been walking for eight hours, carrying their young children in hand woven slings on their backs. Many of their husbands had made a similar journey six years earlier as soldiers of the Zapatista Liberation Army. The men had come to the city to declare the autonomy of the indigenous peoples of Mexico. Now their wives made the journey in an attempt to come together and form a group that would have the power and independence to move their struggle forward. We would help them by importing their handmade wares, and selling them in Los Angeles.

The women came from many different parts of the jungle. Some had been to the city before; for others, this was the first time. Many of the women had been kicked off the land where their Mayan ancestors had lived for thousands of years. The resources that had sustained life in their villages since they were founded were now being polluted and destroyed by the Mexican government. For the women, creating a cooperative to have one voice in order to make their statement of autonomy strong, was a huge step towards achieving their solidarity.

We met with the women to discuss how they would ship us their art and clothing, and how we would wire them the proceeds. Their children sat around a table outside laughing and drawing. A young girl with a playful smile helped the younger children and led them in activities.

When we finished the workshop, we set out for a hike with the women and children. I led, with the young girl playfully skipping behind. We began to talk as we continued walking. Her name was Adela. She had been living in San Cristobal for six months. She came alone and was initially living with a family that were friends of a friend. She worked around their house cleaning and helping out with the chores. During the day she went to school. There was no schooling in her native village, and at fifteen years old she had taken it upon herself to move to the city to get an education. But in the spirit of the movement in which she had been born, the education was not for her own benefit, but for the benefit of the others in the struggle. 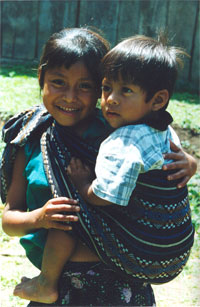 I looked into her eyes as we continued walking. Her face was young, but her eyes seemed unexpectedly experienced. She went on to explain that the family that she was initially living with had become suspicious of her parents’ involvement in the Zapatista movement. When they started asking questions about the location of the army and her father’s connection to it, she was forced to flee in the middle of the night. With help from the organizer of the cooperatives, she found a small apartment and continued her schooling, living alone in a dangerous part of the city.

Adela moved with the upbeat walk of a fifteen-year-old. She said she planned to return to her village to be an education promoter, teaching the children of her village and working to build a schoolhouse. This was her part in the fight to gain dignity for her people. Although she looked even younger than fifteen, it was clear that she embodied that spirit and connection that the indigenous women shared. She was strong and proud, yet I know the things which she has faced could leave the strongest person on their knees. She retained her dignity and became stronger because of it.

The women felt a connection to the earth and to each other that was inspiring. They did not occupy themselves with the frivolous details of everyday life. They were fighting for their freedom. They wanted a voice and a home that they were entitled to. They did not understand how the government could view the land that they had lived on for thousands of years as land that could be owned or taken away. Their life was based on what the land gave them, and the traditions that had been passed down to them.

When it came time to pick a name for their cooperative, we asked them to think about the things that mattered most to them. They chose the name Mujeres de Maíz en Resistencia, “Women of Corn in Resistance.” These women lived a struggle; they were fighting for their homes, their rights, and their freedom. In the face of all this oppression they retained a dignity that I will never forget.