The Hardship and the Answer 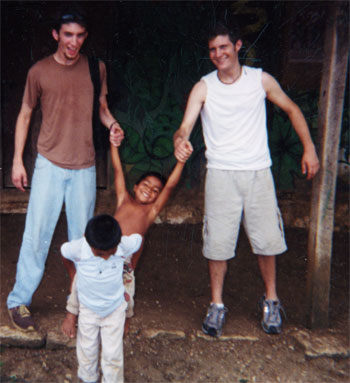 Early this summer, Mickey Morgan led me and a few other fortunate Oakwood students on an unforgettable voyage to Chiapas, Mexico. Chiapas is located in the southern region of Mexico, and it is both incredibly fertile and also full of resources. However, as a result of this abundance of natural resources it has for many years been the center of an intense conflict. For years, the Mexican government and the Zapatistas have fought over political control and distribution of the land. This bitter conflict has left numerous citizens distraught and suffering from both emotional and economic hardships. Although the war is currently at a standstill, the poverty is worse than ever.

We spent most of our week in a large city in Chiapas called San Cristobal de las Casas. Here we met with various figures, including human rights activists, medical workers, and a media group that has helped indigenous people to themselves document the struggle of Chiapas. The trip was so incredibly eventful that it would be impossible for me to describe the week in full detail without accidentally producing a novel.

The most memorable experience of the trip, however, was our visit to the village of Roberto Barrios. To get there, we trekked through miles of jungle terrain, cutting across vast grass fields and hobbling through beautiful flowing rivers. The true reward of this journey came when we reached the actual village, where the community kindly greeted us. There we met with a shy group of women, who produce a large quantity of artisan crafts for our project in Los Angeles.

After having a heartening talk with them, we had a chance to play and connect with the children of the community. What struck me most about them was that despite the poverty and harsh living conditions that they faced on a daily basis, they remained some of the most genuinely happy children I have ever met. However, we received the children’s greatest gift when they led us through their homes to a hidden and awe-inspiring waterfall. The waterfall was like a magnificent playpen of nature that these children had to themselves. Their sharing it with us rewarded our efforts in Chiapas, and made us feel truly appreciated.

We spent the last days of the trip meeting solely with women who represented cooperatives which send us products in Los Angeles. We spent hours comparing life styles, and learning of the daily hardships that they and their families face. These women often wake at 4:00 in the morning to grind corn and make tortillas for their family. When they are not tending to their households, they spend all their free time sewing and creating clothes that are beautiful works of art.

The great tragedy, however, is that because there is no stable distribution system in Chiapas, these women sell clothes that they have spent many hours working on (if at all) for only two or three American dollars. With prices this low, it is almost impossible for these women to make a profit, let alone to provide for their family.

Helping the women escape this misfortune is the intent of the Oakwood project. Mickey and many an Oakwood student can be found selling these women’s clothes, purses, and so on, at the Mercado La Paloma every weekend. The Mercado La Paloma (Dove Marketplace) is an eclectic collection of vendors, delectable restaurants, and often the site of various cultural events.

Working at the Mercado is a wonderful experience, as it is a chance not merely to contribute to charity, but actually to make a true difference in many people’s lives. The products at the Mercado are sold for a substantially larger amount than they could be sold in Chiapas, and absolutely all money is sent back to the cooperatives. I encourage not only students who are interested in working at the Mercado to participate, but also for all parents and students to pay it a visit.