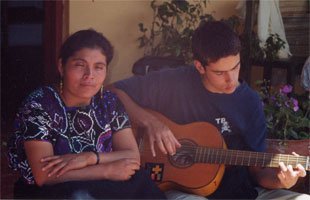 When kids see Mickey Morgan get up at Town Meeting and make an announcement about the Oakwood Chiapas Project, which helps nine women’s co-operatives provide financial support for themselves, their families, and their villages, they don’t fully grasp the significance of what it’s done for these people and how grave their situation truly is. When you go downtown to the Mercado La Paloma, where Mickey and various students and alumni sell the hand-embroidered clothing which these women produce, it still feels a little abstract and out of context. Even when watching documentaries and reading books and articles about the intense political conflict taking place in Chiapas, Mexico, it all just seems a little too far away.

But when you sit in the middle of the jungle face to face with fifteen men and women in ski masks, and you hear about their history as Zapatistas and their desires for the future, everything comes quite suddenly into perspective.

The war in Chiapas is, essentially, at a standstill. There still exists, however, a great conflict between the indigenous inhabitants of the area and the Mexican government. This government, driven by the tempting prospect of increased profit and commerce, has been trying for years to drive these people off of their land and take possession of it. In 1994, following countless injustices, denials of basic human rights, and a long period of oppression, the EZLN (National Zapatista Liberation Army) staged an armed revolt.

The indigenous peoples of the region declared themselves to be in a state of revolt and began to call themselves Zapatistas, after the famous revolutionary Emiliano Zapata, who took part in the Mexican Revolution of 1910. These rebel communities, unlike most, do not want to separate from Mexico; they simply want their basic rights to be honored by the federal government. Following the very brief armed revolution, peace talks and negotiations were held for a few years between the government and the Zapatistas. Several agreements were made, but never carried out by the government.

The Zapatistas, who have a very peaceful and diplomatic way of conducting themselves and of handling their situation, have declared autonomy due to the government’s lack of promise-keeping, and have managed to establish for themselves an independent, well-organized system of government. In addition, many communities have collectively raised enough money to send one or two of their older children to a proper school in the city and have then brought them back to the jungle to share what they have learned and to help educate the rest of the community. Other ways in which the rebels have transcended their seemingly hopeless situation include training human rights defenders and “health promoters,” setting up medical clinics, building five major community centers (aguascalientes) where there is access to libraries and schools, and, of course, setting up various cooperative businesses. 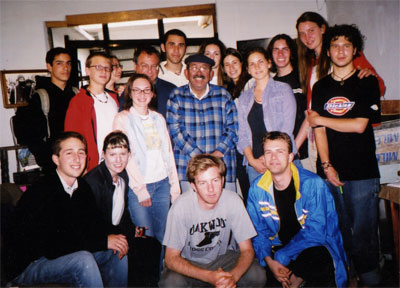 The co-ops which the indigenous people have set up are mainly comprised of women, and have been a major financial help for all communities, mostly for buying necessities such as food and medicine. Organizations and programs on both the local and international levels have aided some of these cooperatives. The Oakwood Chiapas Project began working over two years ago with a group of nine co-ops who call themselves Las Mujeres de Maiz en Resistencia (Women of Corn in Resistance). The program has raised over $24,000 for these nine cooperatives (four of which are officially Zapatista) — which have recently been joined by four others, for a total of thirteen. Because the women must send their work with no assurance of payment until they actually receive the funds, trust between the women and the people working in LA is fundamental.

In order to maintain trust and communication with these secluded people, and to heighten students’ and teachers’ understanding of the reality of this work, Mickey has set up annual trips in June: teachers, alumni, and students meet with representatives of the nine co-ops in the city of San Cristobal, Chiapas. Because the indigenous people are not accustomed to the technology and business that have taken over society, and therefore do not have many ways of communicating with the outside world, the trip has been vital for the bond that exists between them and those working out of Los Angeles.

This year the trip lasted for eight days. When we arrived in Chiapas, we were driven into the small city of San Cristobal, in the highlands in the south of the state, where we would stay. For the first few days we attended talks and meetings with various social and political leaders. There we learned about the economics, politics, government, healthcare, rebellion, genocide, indigenous rights, and environmental concerns that pertain to Chiapas and the Zapatista movement. This was an enlightening experience, which really brought the members of the group closer to the people living there.

After this introductory education on the history of the struggle, the group traveled to the Zapatista town and cultural/community center Roberto Barrios, in the Northern Zone, deep in the jungle. The center’s crude buildings are decorated with brightly colored murals that depict Zapatista struggle and victory, as well as a peaceful life for the people of Chiapas.

There members of the Oakwood group talked with various members of the community about their struggle and what it’s like to actually experience what they’ve been through. There is a bread-making co-op there, which helped us to visualize exactly who is helped by the program. The group also took a short walk through the jungle to swim in the natural pools that form at the base of a large series of waterfalls there. While floating in one of these pools, with warm rain falling all around and monkeys playing in the green trees overhead, one can easily comprehend the indigenous peoples’ sacred attitude towards the earth, and why this war is worth its consequences for them. 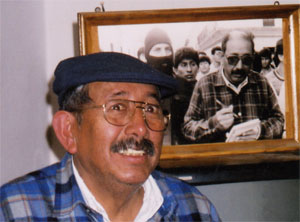 This year, near the end of our visit in Roberto Barrios, we were lucky enough to cross paths with the fifteen representatives of the different autonomous municipalities of the zone. They expressed interest in meeting with us, and so we sat together for two hours, long after the sun had set into the trees and the crickets had begun to chirp, in their small hut of a schoolhouse, we in our bathing suits and they in their ski masks. They responded deeply, sincerely, and carefully to our questions about democracy, autonomy, their work, and their hopes. The feeling was intense, and one man began to cry over our attempts to struggle with them in order to achieve rights for them and their people.

After visiting Roberto Barrios, we spent two days with the representatives of the nine co-ops whose clothing is sold at the Mercado la Paloma. We met with them in a house on the outskirts of San Cristobal. At first we were both shy, wondering who these people were, but that soon faded as we began to do activities that helped us better understand each other. When we first got there, we were all asked to make representations of our communities in clay. The differences were amazing. We had trouble explaining the concepts of fast food to the women, some of whom had never been in a restaurant before, and for whom eating together is an essential part of everyday life in their society and families. We also had to describe the ocean in terms of a huge river that you couldn’t see the end of. And they were a little confused when one of the Oakwood teachers tried to explain concepts of psychology and psychotherapy.

After this, we made and painted candles that we exchanged with the women, discussed our common concerns (education, government, work, family, etc.), and acted out skits of what we interpreted each other’s life styles to be. We spent one day “doing business”– discussing clothes, talking about other artisan possibilities, and trying to organize the program to better fit the women’s needs. They took fittings, and listened openly to students’ ideas about styles. In the evening we had one last spontaneous cultural exchange in which we played the guitar and, shyly at first and energetically by the end, sang songs from both the Zapatista and American cultures.

We left knowing we had made new friends that we would keep close to us, even if we never saw them again. We had a deepened understanding of what exactly is going on in Chiapas, and what it is to suffer. We can say that we will never lose the bond that was developed between us and these struggling people. Now when we visit the Mercado La Paloma every Saturday to sell clothes, tablecloths, hangings, purses and so on, we have a genuine reason to be there and help. We know the people we’re helping, we know why we’re helping them, and we know that we can.