A State of Poverty: A Place of Hope 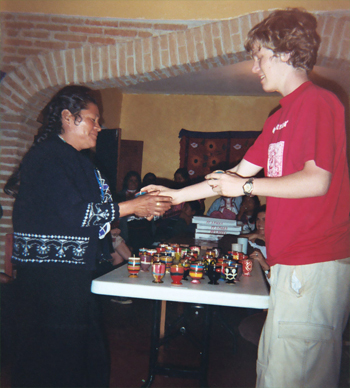 Chiapas, Mexico. The industrializing Mexican government is trying to take over indigenous land. While industrialization offers these starving people paying jobs, these manual jobs give them no self-respect, and in return they will lose their land, their culture, their art, and their language. It doesn’t seem like a fair trade. That’s why Oakwood Students have banded together to help indigenous peoples of Mexico in their resistance. We work with various women’s cooperatives. The clothes we sell are from Las Mujeres de Maiz en la Resistencia, a federation of thirteen women’s cooperatives. By selling their products, we help the women preserve their art and culture and, more importantly, keep them and their families alive.

For the past several summers, groups of Oakwood students and faculty have traveled to Chiapas. The groups meet with various cooperatives and organizations, trying to learn about what is going on there and how it may or may not be peacefully resolved. The trip itself is not officially affiliated with Oakwood, for there are apparent dangers and obviously insurance nightmares. I went this past summer and never felt I was in danger, but there are still the inevitable risks that come with travel. Once there, we were safely escorted from place to place, relaxed and unafraid.

We traveled around the state, crossing natural barriers to enter underdeveloped areas. To reach a certain cooperative (Roberto Barrios), we had to drive four hours by road, an hour and a half by dirt road (bumpy rocks), then park and wade through a river, and then walk a mile. Once we were there, we sat and talked with the women, sharing our lives with one another. We helped them with clothes ideas, and both sides really got a lot out of the discussions.

We also visited a cooperative in a restaurant. When two of the representatives (of over 300 women) spoke, I was truly moved. They had harsh lives and endured so much, yet they had not given up. Some were expelled from their original towns with nothing, left to live on in the mountains for years. They told us that our presence meant the world to them. The fact that we cared enough to travel across the world to listen to them speak gave them hope, and they did not know how to express their gratitude. It was on that night that I realized how much the Chiapas Project is really helping the area. It’s saving a people, a culture, an art, and giving hope to thousands who desperately need it.

Our group of Chiapas travelers also went to a Zapatista village. The Zapatistas are the official group in resistance, comprised of armed and very well organized indigenous people. They wear black masks, with a slit at the eyes. One of the high-ranking Zapatista commanders spoke with us at great length, and asked us to spread their message to those in the United States. He spoke beautifully in Spanish, some of it is obviously lost in translation and my note taking. The Zapatista Commander told us:

“We were here first; we deserve special rights. We should have autonomy, able to develop our own lifestyle. We’re in a struggle to rescue our culture. We are not terrorists, and we use arms only to defend our rights. We want indigenous people recognized. We’re the main injustice. There are lots of poor people in Mexico, but it’s much worse to be indigenous. It’s been nine years since the uprising, and there’s still no answer. Our officials are self-elected, and our autonomy is paid through resistance. The government’s trying to get us to give up. The government is saying there’s no poverty: lies.” He said much more, but as a final message he said, “It’s important to share the world.” 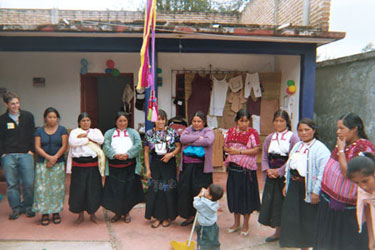 His wife talked to us for a bit as well, and what she had to say was very interesting. It’s hard to be a woman in the resistance. They have to wake up early and make food. Then they have to do artisan work; there’s no other way to survive. Traditionally, women do not have as many rights in their culture. However, in light of pointing out the flaws of modern society, the Zapatistas do not want a flawed society of their own. Women are equals in the resistance, and they take up arms alongside men. They played an important role in the uprising, and it’s the goal of the Zapatistas for women to be active and participant. Women had been basically slaves, sold by their fathers. They had not gone to assemblies or elections, but now they do. Zapatista society is changing little by little as they try to construct a new, more enlightened culture.

We spent several days with Las Mujeres de Maiz en la Resistencia. They are amazing women, and we really got to know them and share our lives with one another. By this point, Oakwood students and faculty have established a good business relationship with them, and a lot of our stay was working on how to improve communication and sales. The women carefully asked questions, seeking answers for their respective villages. We gave them new design ideas and bought a lot of their clothes for ourselves, our friends, and our families.

Since everyone spoke a different language, communication was not always the easiest. Spanish was a common second language among many of the people, but it was no one’s first language. People either spoke English or an indigenous language of Mexico, three different ones in the group of women. To communicate, we played different ‘games’ that did not involve much talking. We sculpted scenes or objects from our villages out of clay, painted candles, danced, and sang. 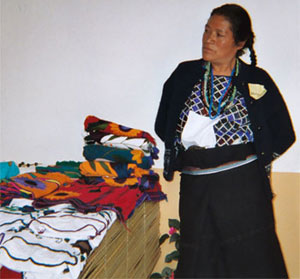 Altogether, the trip to Chiapas was an amazing experience. Being able to share your life with others – no matter how briefly – is remarkably rewarding. I highly suggest that everyone try to go, though I think next year’s trip is already full. If anything, the trip taught me how important the Chiapas Project really is. Each dollar we sell of their clothing helps them stay alive and aids in preserving their culture, art, and hope. Please consider that next time you see us selling and give the clothes a close, considerate look.