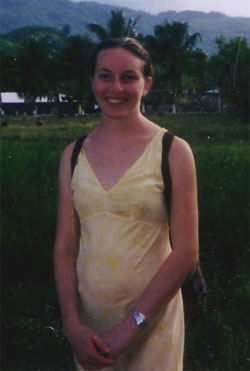 If patience were a thing unfamiliar with us, it was a well-known art with these women. Their jaws were set—not in grim resignation or boredom, but seriously—and their eyes were pregnant with meaning. Mothers shifted under the weight of their children, babies bundled and slung across their shoulders like firewood. Old women embroidered a pattern on cloth, slapped at flies and braided thick ropes of hair. Sometimes the women giggled, cupping hands in learned embarrassment over their whispering mouths. We watched them.

This was the third hour of our meeting with women’s cooperatives in Morelia. Translations ended suddenly when the juntas wanted to know more about the nature of our visit; perhaps the novice government authorities were drawing up new negotiations in a wooden office somewhere. The procedure was only ceremonial, but we all knew the wait would be a long one.

Small bodies, however, are always restless, and so the children began to invent games among themselves while we waited. They eyed us, caution giving way to curiosity until finally they crept closer and took our hands. Here was our chance to play and laugh and be loud (for young gringos also find it tremendously difficult to remain seated in silence, and we would not pretend to be capable of it any longer). We showed the children our jewelry and our sunglasses, we spun them dizzy in circles; they taught us the Tzotzil names of animals and wondered at our neon clothes. But the women only watched us.

This pause meant time to wonder—what intricate psychology, memory or observation was a part of these women? They were thinking things we could only guess at: tortillas, death, callused feet, bus rides and the army, fever and money and sleep. It was easy and not easy for them to sit still and think about these things.

Outside, the mists rose solemnly over the little schoolhouse, whose walls were painted with brilliant starscapes and political imperatives: “Viva EZLN!” Mountains purpled with flowers stood in quiet majesty. Two farmers idled by a fence post. The valley sunk lower in smoke and dusk, hiding itself as the sun set across the state of Chiapas. And all around were heard the sounds of living things.