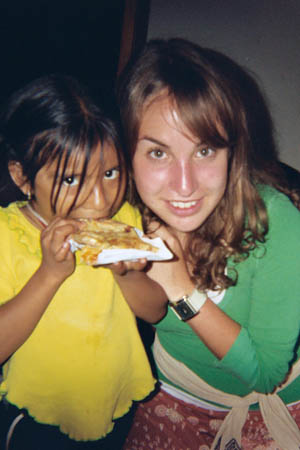 After a night of air travel, involving a stop in the Mexico City airport, and a bumpy ride on a tiny plane, we landed at the single runway airport in Tuxtla Gutierrez, Chiapas. Hilary and Niki met us with the two vans that would serve as our transport for the rest of the week. We drove through lush, green canyons. The newly built road was something like Mullholland Drive on steroids, with steep drops on one side. As we crossed a bridge over a deep gorge, our driver only half-jokingly told that the bridge was likely to break soon.

After two hours, we arrived in the city San Cristobal (official population about 95,000), where we would spend six of our seven nights. Perched in the mountains at around 7,000 feet, the city is best described as “romantically decayed.” A stormy gray sky served as a dramatic backdrop to the Spanish colonial style buildings, which were swathed in vibrant colors. The buildings on every block were attached, so magenta changed from peach to lemon yellow, to olive, periwinkle and burgundy as we walked down the street. Stay dogs loafed on every corner.

Our hotel, La Posada Dona Rosita, was in keeping with the city’s general color scheme, with liberal splashes of orange in the common area, and yellow-saturated walls in the girls’ room, all accented with blue and white patterned floor tile. Dona Rosita herself was a small woman who made us generous helpings of eggs, toast and coffee every morning and dined with the hotel’s other young, backpacking internationals at her own table.

During the next two days we received a crash course in the many social and political issues faced by the people of Chiapas, through a series of meetings arranged by Nikki and Hilary. Bleary-eyed though we were by our red-eye flight, we tried to absorb as much information as possible, knowing that what we learned would set the foundation for contextualizing our experiences in the coming days.

We left San Cristobal on Tuesday morning for a two-day excursion. The coniferous landscape gave way to lush rainforest as we traveled down the winding mountain roads. Our destination was the village of Ocotal, home to one of the Mujeres de Maiz en la Resistance cooperatives. Perched on a hill, the village is only accessible by a steep dirt path. Though the road seemed perilously narrow, our vans climbed it dutifully, stopping once as one of the wheels slipped off the road as we crossed what I can only describe as a very small waterfall. Near the top, we stopped to pick up three young boys, who had been walking for hours up the hill—the only route between the large town of Yajalon and tiny Ocotal .

In the village, chickens and dogs ran wild around us as we walked up a steep path through tall grasses up to the site where the women from the cooperative were assembled in a small wooden structure that was later revealed to be the general store they built with their earnings from the Oakwood Chiapas Project. We sat on the wooden benches that had been set up for our visit, talking excitedly amongst ourselves as homemade fruit juice was passed around in paper cups. Introductions were made all around and, with Nikki acting as translator, we discussed their cooperative, and life in the community. They told us that a small piece of their traditional floral needlepoint pattern takes days to make. This is in addition to caring for their children and animals and preparing meals from scratch, often rising before dawn to grind corn for tortillas. However, their artisan work, their only source of income, allowed them to establish the small store, which provides basic goods for their fellow villagers that would otherwise only be found in Yajalon, several hours’ walk away.

All formality vanished as the interview ended. Several students joined the mujeres in the store to help prepare lunch. A six-year-old girl named Sadie entertained herself by taking off-centre pictures with Sascha’s digital camera. (Everywhere we went, the children were captivated by their images on the camera screen.) Sadie, who is from Yajalon, had met Oakwood students last year when she accompanied her mother and grandmother to the encuentro, and was already a master at monopolizing everyone’s affection. Meanwhile, feeling a sudden urge to communicate, I joined Nora and Chloe in a conversation with a girl who turned out to be our age.

As no one of was completely conversant in Spanish, our conversation was somewhat limited to simple questions (How old are you? How many brothers or sisters do you have? Is Chloe’s red hair colored?). I attempted to string together the handful of Spanish words I know into coherent phrases, asked my friends to translate, and cursed myself for not taking Spanish.

We spent the night in Palenque, a humid, ramshackle city with none of San Cristobal’s charm. We slept with wet towels draping our bodies to cool off, and awoke in the night to sounds of passing trucks and the unearthly wail of mating cats. There are two popular tourist attractions neighboring Palenque: the Agua Azul waterfalls and the awe-inspiring ruins of the Mayan temples. We visited both, accompanied by a seemingly endless supply of German tourists in their bus caravans and the odd Speedo-clad Italian at the waterfalls.

Before departing Palenque, we met with three women from Ixim Anztetik, a women’s health center in Palenque. They are the first and only organization to serve the medical needs of indigenous women, providing counseling, basic health care services, referrals, and information about health, birth control and legal aid. Silhouetted against a mural of smiling women and corn, they told us horrific stories of indigenous women denied aid at local hospitals, even when their lives were in danger, as in the case of one woman who was possibly suffering a miscarriage and was turned away until a woman from Ixim Antzetik stepped in. Though they often face scorn from the community, and even members of their own family, the women we met described a profound sense of satisfaction and empowerment in their work for the organization.

The following morning, we left for another excursion. This time we traveled upwards, further into the highlands to the community of Acteal, the site of a 1997 massacre where 45 people were murdered by paramilitary forces. On the 22nd of every month, the villagers honor the event with a special Mass, which we were fortunate enough to attend. The service was preceded by a procession from the sight of the massacre, a small wooden church, to a large commemorative sculpture by the main road. The service itself was conducted in a large outdoor amphitheatre. In addition to the villagers, several dozen international aid workers or tourists attended. What struck me (and I believe those around me) most was the kind of solemn joyfulness with which the villagers conducted the ceremony. We had visited the church where the murders were committed, seen the bullet holes in the walls and the pictures of the victims, mostly women and children, and we were somewhat bewildered by the attitudes of the villagers. I would continue to see almost confounding strength and resiliency in everyone we met.

We left after the service and traveled forty-minutes or so to the village of Los Chorros, home to the Abejas, one of the most successful cooperatives in the Mujeres de Maiz. 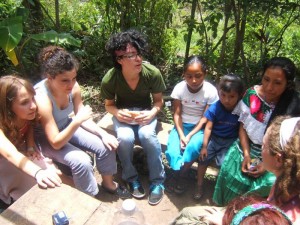 We had lunch at the home of two sisters who are the cornerstone of the operation, and have chosen not to marry in order to devote their time to their artisan work. In the absence of males, the work of doing the family’s share in gathering corn in the village’s field had fallen to their mother. A number of women from the Abejas prepared a plentiful meal for us, and their mother in particular seemed overjoyed to host us, since she had never met Oakwood students before– she repeatedly burst into tears and thanked us all, over and over. And, though Nikki said smilingly, “She always does that,” the old woman’s spontaneous outpouring of emotion seemed to change the light-hearted gathering to something deeper and more personal. The tone of the gathering took a serious turn when the sisters told us about their experiences being held hostage in their village by the paramilitaries. And it’s not over, we learned: paramilitary members are still living in the village, and one woman suggested ominously that they would likely be approached by paramilitaries when we left, expecting that we would have given them money.

The following day was the start of the two-day encuentro, during which representatives of the cooperatives (including the Abejas, Sadie and her grandmother, and a few of the women from Ocotal) come to San Cristobal to meet with the Oakwood delegation. As part of an introductory exercise, Nikki and Hilary had us divide into groups and construct out of clay something representing our communities. Each cooperative group portrayed their village, while the Oakwood groups created a beach scene with the Santa Monica Pier, a full rendering of Los Feliz, and a freeway traffic jam, complete with Hummer and limo. The rest of the day’s activities consisted mainly of similar introductory activities (one game resembled the Bar Mitzvah standard, Pepsi- 7-Up), arts and crafts, mingling, eating, and…shopping (how could we resist?).

The next day we discussed the previous year’s sales and evaluated the aesthetics of the goods that the women had laid out for us to critique. (They were shocked to hear that midriff-baring shirts were out of style, since Oakwood students five years ago had insisted that they were all the rage.) We also discussed the nature of the partnership between Oakwood and the Mujeres de Maiz. Some of the women expressed concern that we had to put too much of our time into the project, or that we had to beg people to buy their goods. We assured them that it was quite the contrary— it required neither an undue portion of our time, nor convincing and cajoling to sell their work. And as for Mickey, he graciously assured them that though he does work hard, he does not work nearly as hard as they do.

The two days of intensive interaction culminated in an emotional goodbye. We danced to a hired mariachi band, and had a sing-along of sorts — they sang the Zapatista Hymn and traditional songs; we sang “Redemption Song” and “Blowin’ in the Wind.” Finally, we went around in a circle and everyone spoke. On both sides, the sentiment was one was gratitude and admiration, expressed with warmth and often with tears.

It was pouring when we walked back to Dona Rosita’s. In the morning, we ate our final breakfast of eggs, tortillas and toast, paid a last visit to the local artisans’ market for some last-minute gifts, and said goodbye to Nikki and Hilary. We arrived at LAX that night tired, happy, relieved, and a bit dirty. My parents asked me how it was. I didn’t know where to begin, so I simply said, “Sad to leave. Happy to be home. I’ll tell you about it later.”

Words can’t express what a moving, incredible and rewarding experience the Chiapas trip was. I hope everyone involved with the Chiapas Project has a chance to experience it first hand. And if there’s one thing I want to stress it’s this: Oakwood is the only group that sells the artisan goods made by the Mujeres de Maiz collectives. The Chiapas project is essentially their only source of income; every contribution makes a profound difference. So, for the many of you who have taken part in the Chiapas Project, take satisfaction in knowing that your contributions have gone to real, tangible use. We hope to see the Project grow through the continuing support of the Oakwood community and concerned citizens.