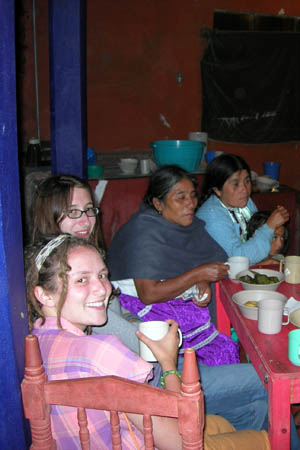 Our trip to Chiapas ended with an Encuentro — two days of conversation, cultural exchange, and play with The Women of Corn in Resistance. One of the first things we did was to make clay models of the city or town or village in which we live. Each cooperative made a model of its village, and the Oakwood students split into small groups, each making a model of different areas and aspects of Los Angeles.

The students created mini-replicas of traffic jams and freeways, fast-food restaurants and Starbucks coffee shops. We constructed models of large things that in many instances we don’t even like. Although these things say something about the nature of the world in which we live and the fragmented way in which we experience that world, they seem awkwardly disconnected from the important aspects of our identities as individuals.

The women made models of their homes and their churches, their cats and their sheep, the fire on which they make their tortillas and the fields in which they grow their corn. The nature of the things they chose to construct displays the deep cultural and emotional connection each woman has with her physical space in the world. They modeled small things that are close to them as individuals, and linked both to their identities as women and to their identities as indigenous people. Unlike us, the women live in a place and within a culture where their physical space and the things that surround them in that space are deeply connected to their sense of themselves.

This connection that the women have with the land and the space around them seems to give them a kind of intuitive knowledge about themselves and how they fit into the world on a broader scale, a knowledge which is very much reflected in the messages of the Resistance. To them, the Resistance in Chiapas is about their rights and their autonomy but it is also about beginning to build a new kind of world, “a world in which many worlds fit” (a Zapatista slogan). It is as if their own deep understanding of their physical place in the world gives them the ability to look beyond themselves and see how their place is connected to our place and the place of every other individual in the world. They are able to see that their struggle reaches far beyond themselves.

“Their struggle is our struggle.”

I think that in many ways this is what attracts students and others to the Chiapas Project. It is something relatively small and extremely personal, yet it seems to dictate something much more global, the hope that “another world is possible” (another Zapatista slogan). It is not only the beauty of the products that is so attractive, but also the beauty in the drive and inspiration to make these products. There is something moving about the women and how genuine their efforts to create a better world are; there is something very pure about the Project and all that it involves. It is this purity which inspires sincere and unadulterated hope, hope that the world can be changed through genuine communication and fair exchange.

After being part of the delegation, we better understand just how deeply and fundamentally connected we are to The Women of Corn in Resistance and their struggle. Their struggle is our struggle. It is not only the women but also ourselves who need their indigenous cultures to be preserved and recognized, and for them to be empowered as citizens, as women, and as individuals.