The Land and the Women 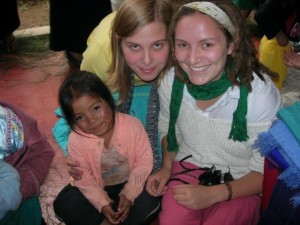 I avoid writing about things that I find too difficult to confront and too complicated to work out within myself. This time I am going to confront something that I have not finished working out within myself, but I need to address in writing. I want to write about Chiapas.

Traveling to Chiapas–meeting the women and seeing the land– made me realize the significance of the Chiapas project. It connected me emotionally to the project. It heightened my awareness and clung to my thoughts. It changed me. Going there showed me the different personalities of our co-workers and acquainted me with their strength, generosity, sense of community, and modesty. And it also helped to implant within me the important relationship between the indigenous and their land.

Witnessing this relationship, between the indigenous and the land, deeply impacted me. The relationship is complex, rooted in history and tradition, and I have spent time thinking about the different layers of this relationship. Just looking at the women, the texture of their skin and the sound of their voices, I intrinsically felt their tie with the land, as if they were woven into it, but I did not intellectually understand why my gut had this immediate reaction. Even though I had learned about their connection to the land in learning about their cause, I would have had the same gut reaction had I gone in with no previous knowledge of their struggle.

After giving it much thought, I began to see parallels between the land and the women. And then it seemed to me, after giving it more thought yet, that the land is a metaphor for the struggle of the indigenous luchadores. I will begin explaining this metaphor by giving a full description of the land.

The beauty of the jungle strikes the eye immediately–the thick green canopy adorned with scattered, wispy shelves of cloud–it is an Eden, lush and fruitful. However, step behind the curtain of trees, physically enter into the jungle, and enter a rough and humid terrain. Gluttonous mosquitoes, hidden anthills, spiders as large as a human face. To live in the beauty of the jungle is not something that many could endure without air conditioning, flushing toilets, access to running and heated water. But in spite of all that is harsh about the jungle, it holds an appeal that most can relate to, that most enjoy to watch on high-definition T.V. or see while on vacation.

Now to compare it to the struggle of the Zapatistas, of las mujeres y los campesinos, of the indigenous in Chiapas. Their dignity is the most beautiful dignity that I have ever witnessed. And their struggle one of the most difficult. Again, many can sympathize with idealistic images of fighters in the jungle, resisting the government and living purely alongside the land, but many do not look into it much farther than that. To struggle as the luchadores struggle is to make a decision, to choose a much more difficult life because the government aided option is a betrayal to culture and tradition, because the government aided option means giving in to corruption. It takes an incredible amount of strength to make such a choice even though they make it seem easy and natural. And so, like the jungle, the struggle holds a difficult beauty that not many could endure. And yet it is hard to separate the land and the struggle into two pieces of a metaphor because the two are so tightly woven together. The land is part of the struggle and the struggle is, in part, for the land. And their individual beauties are reflected in one another-the sounds of voices, the look and feel of skin that is subject to such physical labor, the rows of corn and the beauty that comes when land is cultivated by individuals, the hillside pueblitos that do not disturb the look of the nature and look, in fact, as if they are supposed to be there, like the hill just grew that way. It is almost impossible to separate the people from the environment that is so a part of who they are.

And who they are is apparent upon first meeting them, just watching how they carry themselves and how they speak to others. There is a serene strength in their faces. What touched me so deeply was how easily we communicated despite the language barrier and how easy it was to see them for who they are. Through all of their hardship, they remain warm, accepting, and inviting people. They have the strength to continue fighting for their land, their culture, and their rights.