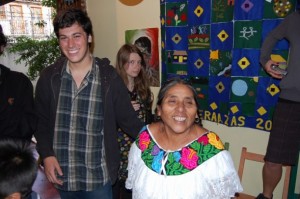 I set my backpack down on the ground in front of me and look around. Women usher children through the city’s main square while others sit shoulder to shoulder along the perimeter, selling scarves, dolls and bracelets. The sun is high in the sky and as I sit and wait for the rest of my group to congregate, I notice two little boys playing across from me. They run back and forth, yelling to each other, their shoeless feet barely making a sound on the stone walk. Behind them runs a younger, smaller boy, a brother I assume. I watch their game, thinking about how small they look and wondering how old they might be. I never decide on a definite age, but clearly they are at an age when normally children don’t feel the need to act like adults. The children of their age which I know would be appalled by this idea; to be like their parents, the main adults in their lives, is the opposite of what they want. That is what draws me to this trio, their complete departure from what I am used to. When they reach the far end of the courtyard, the youngest of the three, the tiniest boy, falls over a curb. Though he reacts as any small child would, his older brother moves into action in a way completely unlike anything I would have expected. Like a miniature adult, he scoops up his brother, carries him away from where he fell, and then sets him back to keep playing. This act of surprising maturity barely slows down whatever game they are engrossed in, and once it passes the playing continues.

I look back on this moment, replaying it over and over in my head, trying to understand why, of all the things I experienced in Chiapas, this is one that stands out. Such a seemingly unimportant moment has come to mean so much more. Happening so early in the trip, this scene created a kind of frame through which I watched everything else that happened to me. These children’s lives made a kind of role reversal necessary. They were forced to move beyond the roles of children I am used to. As I traveled through Chiapas, meeting indigenous people and learning about their lives and their struggles, I noticed similar shifts in responsibilities. The immensity of their struggle has forced regular citizens to reexamine and restructure their lives. Men and women from small villages, people that one would never picture as being government officials, have become just that. We saw many examples of this restructuring as we traveled to the autonomous government centers (caracoles). The Councils of Good Government who ran them were comprised entirely of these villagers. They have no qualms about their new roles, just as the small child had none with his. As they see it, the voice of their struggle called out for a voice of the people and they responded.

I feel that this attitude defines the idea of “the other Chiapas,” a phrase I heard thrown around numerous times throughout the trip. Thinking about it now, I feel that this is the perfect way to describe the incredible actions of the indigenous people of Chiapas. I was constantly amazed by their unwavering devotion to the causes that defined their movement. Seeing it as an opportunity to gain the rights they lacked, they allowed their lives to rearrange themselves. They represent a group of people who on the one hand are a part of the state of Chiapas, and on the other, when they need be, are a part of this other Chiapas. When their brother falls they are more than ready to leap to his side and pick him up, whether or not they are old enough to be parents. In every person I met I saw this sense of devotion, and I was constantly blown away by it. They recognize that their rights are not being met and they are not willing to stand by and let that happen. In this other Chiapas life moves forward, but when a person needs to step up to do their part they do it happily. They represent true devotion and true passion for a cause, a quality unfortunately lacking in the lives of many people today.