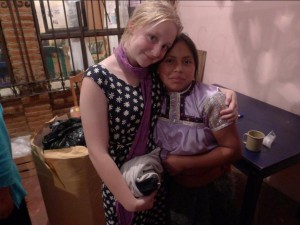 When we arrived at the Las Ollas workroom, the women greeted us with smiles and soft handshakes. Many of them were shy, and the younger girls were giddy and seemed hesitantly eager to talk with us. They each wore the most exquisite clothes I had ever seen, embroidered with stunning colors and finely detailed patterns or flowers. They appeared strong and empowered, nothing at all like what I had been expecting.

Our delegation sat around their worktables on small benches and wooden chairs. None of the women would sit, not even the older women or those carrying babies. Each group, students and women from the cooperative, went around introducing themselves. The women laughed at our odd American names, and it was through this small social interaction, one usually associated with simply being polite, that we were able to start our growing connection with one another. as business partners, as friends, as human beings.

The next thing I knew, the women were hurrying inside the main house to gather bags filled to their edges with woolen goods. In a matter of seconds the two large tables were piled high with the most amazing purses, vests, slippers, and backpacks. The instant that I actually realized how sensational these women’s work was.I looked up. I looked to where the sound of pounding rain led me, to the ceiling made of plastic and wood, with an open gap between it and the actual walls. I then began t o look around more seriously, and it was this act that confused me. I saw a space with a concrete floor (something I know is a rarity for these villages), walls of wood planks that had no insulation or anything remotely close to the sort, nails serving as hooks for tools and art that the children made when they were in school. I looked back down at the artisan goods in front of me. Everything I saw was made in this room, made by these women’s hands. This is something I still can’t seem to wrap my mind around: How can something as beautiful as what was in front of me come from a place that looks so, well. desperately poor?

I don’t think I’ll find an answer for this question, a question that seems to come back into in my mind frequently even now. I barely think I can express my confusion with words. The only thing that can come remotely close to explaining this is the women themselves: they embody and express the ideals and purposes of the Zapatista movement, and even more they serve as prime examples of women’s empowerment. They don’t hang their heads in shame or beg for money; they don’t let their poverty impoverish their soul. As Westerners, we are trained to think that lack of money is dishonorable and embarrassing, but we fail to see beyond the empty or non-existent bank account.

Once we had sorted through the women’s animal-shaped backpacks and began talking with one another, we were invited on a walk to see the women’s sheep and fields. We were taken behind their workspace, through a small, astonishingly green gorge and up a hill, where we saw where they care for their sheep (the source of the wool they use) and grow their own food – corn, beans, and squash. Here I was able to make my first individual connections. I began speaking with two girls my age, Sofia and Eva. We spoke about school, work and friends and I understood what I could by communicating in my broken Spanish. I was surprised at how cheerful their demeanor was. I kept looking around me during the conversation and couldn’t help but think, “How can someone with this much responsibility, living in this much poverty, be this wonderful, happy and genuinely fun?” This question was never fully answered for me. When I was reunited with Sofia and Eva during the last two days of our trip, in the encuentro, I realized that when we were all together there — laughing, playing and sharing our stories — our economic differences were irrelevant. Even with my terrible Spanish and awkward hand movements, we were able to have simply an amazing time

People had told me that when I came back from Chiapas, I’d feel that I had gone through an amazing transformation, that I would have an epiphany of some sort; but I never really felt that. I never had an “ah-ha” moment, but I think that is because I really lived within each moment. I made genuine connections with these women, people so shockingly different from me; but the most beautiful part of it was that during the times when we would play games or tell stories, I never once thought: This is going to be it, this is what I’ll remember for forever and take back with me. These women are amazing, courageous and yet the most gentle souls I have ever met. Leaving Chiapas didn’t fill me with sorrow because the trip was over, because the time I’d spent had passed, but I was extremely emotional because I thought that I would most likely not see these women again for a very long time, if ever.

The connections you make with people on a day-to-day basis are all over the place, and yet we seem to forget that. We shame poverty, difference and tradition, or so it seems. Our culture has trained us to always be inventing, modernizing and socializing within our means. Going to Chiapas made me really relish the moments that I had there; that to me was my “revelation.” The simple handshakes and smiles I exchanged with women with whom I would seem to have nothing in common.

Seeing the women of Las Ollas during the encuentro was by far the most emotionally intense experience for me during the trip. I had gone to their cooperative, seen where they made their magnificent clothes, and it was heart-wrenching. They seemed to “‘have nothing,” and yet when I saw them again during the encuentro it seemed that they had everything. Our differences weren’t even something I took notice of as I sang and danced with them.

I don’t have one thing to look back at and say, “That was it, that moment changed me,” because it wasn’t that sort of a trip. It was the smiles and the laughs, the stories we shared and the dances we taught each other that made that trip what it was. It seems a cliche, but Chiapas was one giant experience to me. It cannot be broken into bits and pieces because it was one huge culmination of a realization that we are all people, no matter what we have or what we do. We all stand for something and each of us fight for that in our own way. The women of Chiapas taught me that living without tangible wealth doesn’t necessarily define a person. It may be a hardship, but what is real, what is important, is the wealth that you carry inside of yourself.