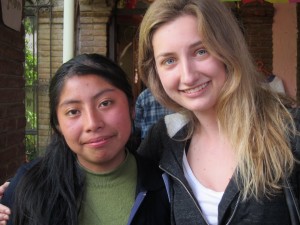 In school we studied the Russian, French and American revolutions; we talked about what makes people decide to become politically active and what it means to be aware and involved. Unfortunately, the study of revolutions, in spite of teachers’ best efforts, is inherently abstract. Ironically, this is completely un-revolutionary. There is nothing that so successfully crushes the revolutionary spirit as the structured study of it on sunny afternoons in Southern California. There’s something revolting to me about sitting in my favorite café, drinking cappuccino and typing away about revolutions on my MacBook. I can taste the familiar flavor of pretense on my tongue; I am relentlessly middle class and really know so little.

As fascinated as I am by revolutions, the characters I face in history books horrify me. Their tremendous spirit and ideological fervor in a sense antagonize me, and make me painfully aware of being white, middle class, and a complacent and comfortable member of modern society. If I am being oppressed, it is with such subtlety than I am completely unaware of it. Far from being galvanized to action, the world I live in seems to want me to sink further into apathy. Electronics get snazzier and smart phones get sexier. Movie theatres get comfier chairs. At the beginning of the summer I found myself without a cause, wallowing in my comfortable existence. Hearing about revolutions in Tunisia, Egypt, and Libya and protests in Bahrain, Syria, Yemen, I felt depressed that nothing like that could happen here. The grandeur and romance of a real revolution could never happen in a world where Ché Guevara t-shirts are a trite fashion statement and Farmville has over 80 million monthly users.

That was what was so incredible about our trip to Chiapas.

I had tried to prepare for this trip. I had watched documentaries about the uprising and about the massacre in Acteal. I had fallen in love with the glamor and Guevarian mystery of Subcomandante Marcos. At the same time, I think I resented the seemingly slow progress of the Zapatista movement; maybe it was a consequence of my cultural upbringing, my desire for instant results, noticeable change. I wanted the Zapatistas to do dramatic things, to emerge from their Caracoles and take some form of action, rather than slowly organizing and administrating. I see now that this is as much a part of their philosophy as a result of it.

On the second day of our trip, the group listened to a speaker talk about the lack of community in the United States and his attempts to start community movements among undocumented workers and families in Chicago. Unsure whether I was expressing the sentiments of the group or just my own insecurities, I voiced what had been worrying me about our part in the larger revolution all along: my feelings of complacency, apathy, and post-idealism. I was corrected rather harshly: post-idealism, the speaker said, is a middle-class luxury. The workers in Chicago, and the Zapatistas, do not have the time or resources to sit around reading Camus and lamenting their lack of direction.

It was an incredible way to start the trip: letting go of my ludicrous burden and self-involvement and immersing myself instead in the candid sincerity of Zapatismo. There was no pretense. There was no middle-class ennui or luxuriating in doubt. The Zapatistas had not read Locke or Rousseau, but they knew much more about building the foundations of a society than we could ever have learned from reading and studying. No Zapatista was worried about whether the Zapatistas were romantic enough figures. The men and women we met in Chiapas were ambitious but practical, dignified but humble.

Although many of us were worried about imposing ourselves on the Zapatista communities, we found ourselves welcomed not as tourists, or as political allies, but as fellow human beings and participants in the global struggle for autonomy, integrity, and respect. No one attempted to proselytize their beliefs; they were presented as what they are, without agenda. I have never met such unromantic and utterly appealing human beings. Far from being disappointed not to encounter the Hollywood storybook revolution I had fantasized about, I couldn’t believe how much it paled in front of an infinitely more complex and interesting reality. Far more than simply being impressed by them, I was deeply moved by the Zapatistas’ intense sense of morality and responsibility, toward one another and toward the world around them. I hope that we’ve managed to bring some of this spirit back with us.