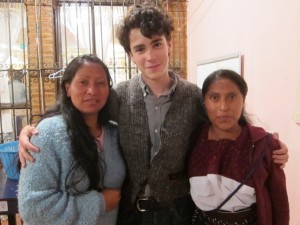 At Acteal the first thing I noticed was the immense beauty of the mountains and foothills that surrounded it. I couldn’t believe that such a horrendous thing – the massacre of 45 villagers, mostly women and children, in 1997 — had happened in such a seemingly immaculate place. We walked down steps that had been built over the very path the paramilitaries had used (on learning this, I had a sick feeling inside), and arrived at an amphitheater where a large group of people sat watching priests lead a memorial service. Members of the audience were going down to the center of the amphitheater and speaking to the crowd in Spanish or Tzotzil. Although I couldn’t understand the words, it was clear that they were talking about how the massacre had affected them or those they loved.

The names of those killed were listed on a banner, and there was a special section for those who had been children. Nearby, a group of small children were playing on a grass hill, sometimes running around through the sections of seats. No one seemed to care that they were playing during such a serious event. I was struck by the contrast between growth and life, and destruction. These kids were playing in the very place that children were once rushed into a church, trying to escape their terrible fate.

In groups of three or four, we left the amphitheater to visit that church, where the massacre had taken place. It was more a wooden shack than anything else, preserved with everything from the massacre, including the bullet holes — and broken boards where some women had smashed out to escape. Again, I was astonished to look out from the promontory the church stood on, the hill which the women had run down to escape death, and see only the green, rolling mountainsides. I still could not fathom the ugliness of the events that had occurred there.

Back at the amphitheater, a choir of indigenous teenagers began singing what sounded like hymns, in Spanish and Tzotzil. In the middle of one of their songs a group of older indigenous men, playing a collection of horns, drums, and home-made string instruments, came down the steps of the amphitheater from a church. There was no coordination between the two groups of musicians, and only we outsiders seemed to find anything odd about the conflict between the sweet, gentle choral tunes and the discordant, raw noise that sounded more like a crying animal than anything else. There was something chaotic and deeply emotional in that moment, but at the time I couldn’t identify what triggered those feelings.

The singing stopped, and the entire congregation was led under the amphitheater into a crypt. A large mural that portrayed the struggles of indigenous people, along with a profound sadness, was on a large wall facing a memorial composed of flowers, candles, and stones at the other end of the room. Everyone went down some stairs towards the memorial, and the men and women split into two groups. We knelt and faced the wall. After some incantations, the indigenous men began to play again and people chanted and prayed and grieved. An elderly man in front of me stopped playing his horn, and began to sob as he stroked the wall in front of him. He very well may have lost his wife and children in the massacre. After the expression of grief, everyone got up and walked around, looking at the murals and memorials, or simply talking quietly with one another.

I was deeply moved, but couldn’t understand what it had meant until quite a bit later. This sort of public, shared display of grief is something that we don’t see in the United States, and it seemed remarkable that these people had made time to remember and reflect on such a terrible loss, as they did every month. But I was still confused about the emotional meaning in the chaos of the mass.

I replayed the events in my head, and my other experiences in Chiapas, and came to realize the significance of the chaos and the contrasts within the service. The choir expressed the cultural background of the people of Acteal and Chiapas; they are strong Mayan people with an old and rich history. The older musicians, on the other hand, brought out more the grief, the struggle, and the sadness that has befallen the people: the emotional effect of the atrocities. These people are both proud and hurt.

It felt awkward to be an observer – a tourist, almost – of this sort of emotional display, but part of the service’s meaning for the community was for us not merely to bear witness, but to share. The mass is to remember the victims of the massacre, but also to recognize all those people in Chiapas who have been made to be victims of one kind or another. The mass is their message to the world, and to themselves. It is to remind everyone that they know who they are: they have suffered, they have struggled, and yet they have survived to remember those who have not, and to continue their struggle for them. Just as the children were not stopped from playing, grief and obstacles cannot stop them from living, fully and strongly. They grieve, yet they carry on.