The Tortoise and the Caracol 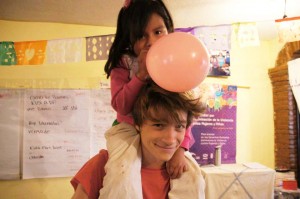 Yanking a stitched quilt tighter around my shoulders, I stared around a large circle trying to make out the twenty or so faces hidden in the cold Carolina night. My little red hands cupped a candle cased in deep green bamboo, and in the wet grass by my side lay my collection chosen from the “gift blanket”– a burned out wooden bowl, a blue and white woven belt, and two knives. One knife was nearly ten inches long and wrapped in purple electrical tape with a spiral handle, the other much smaller and masked beneath a painted leather sheath. All but the latter knife, including the sheath, had been crafted by the giver several days previous. So began my last night at Turtle Island, a survivalist and natural conservancy preserve nestled in the North Carolinian woods. Two summers later, I had an eerily similar final night in Chiapas, Mexico.

Turtle Island isn’t a geographical island whatsoever. The name derives from a Native American myth in which an immense turtle opts to rise from the waters of a flooded Earth and continue to sustain life on its back, the idea being that our planet’s land is the exposed portion of the turtle’s shell. A second meaning: in their mission statement, it is written that the preserve is, “in the figurative sense, an island of wilderness in a sea of development and destruction.” The Island is also a fully functioning farm and home to many, including founder Eustace Conway. The self-sufficiency of the Island, as well as its sense of spirituality, the impulse for natural connection, and a disdain for governmental economics I found, similarly, all throughout Chiapas.

On our second day in Mexico, we visited an autonomous university just outside of San Cristobal (CIDECI), the first Oakwood delegation to do so. I muddied my boots while walking past fields of crops and smelting workshops: the school, free of charge for the indigenous youth that compose the student body, is entirely self-sustaining. This is thanks largely to the students themselves, who, free from the looming threat of tuition, have mastered crafts taught in the school to help keep it afloat—the construction of all buildings, crop fields and even several cars can be credited to the body. Students then return to their villages after six months to two years at the university, to teach the crafts they’ve honed (including painting, weaving and musical ability) to their communities – to help relieve the destitution that is so stark and widespread in the state.

Turtle Island has a similar goal for its visiting students, who it feels are impoverished in a different sense of the word: lacking enrichment and graciousness in their lives. Here an interesting paradox seems to arise: American poverty, although real, hardly compares to the extreme of Chiapas, yet a passion for life, and a positive attitude toward their situation can be found in the Mexican state that I’ve seldom seen in America.

Later in Chiapas, Julio Cesar (Zapatista revolutionary, poet/storyteller and van driver extraordinaire) told us a story as we baked under a humid Mexican sun, waiting in a caracol to meet with the Junta de Buen Gobierno, democratically elected by the people in its zone. There is a caracol, a kind of Zapatista center, for each of the five zones Zapatista territory is divided into; caracol translates to “snail.” Julio tamed our hot and irritated spirits with a fantastic story, not unlike the legend of the turtle: millions of years ago, the snail was the quickest creature on earth, and it was only until the calendar of the human being came into play that it was regarded as a slow animal. The moral of the story is that the revolution in Chiapas, which has slowed down significantly since its beginnings in 1994, should be regarded with patience. Both the revolutionaries in Chiapas and teachers in Turtle Island view the modern pace as a real enemy to their causes, a pace that is promoted largely by the schedules of business and government. Both express the importance of one’s connection to nature, and the more relaxed pace that should be taken throughout one’s life.

In North Carolina, we spent several hours on our final day finishing items we had crafted over the last two weeks — stitching leather pouches, pounding legs into log stools — to be placed on a blanket in a field, opening the good-bye ceremony later that evening. We were to place on the blanket the items that had the most meaning to us. As I watched my friends the next day swap walking sticks for jars of peanut butter, I held my own gifts tightly, knowing that their giver had spent days shaping them with his bare hands. It is only now that I realize that the Chiapan women constantly place their hand-crafted items, filled with meaning to them, onto an international blanket — without expecting a similar gift in return.

On our last night in Chiapas, we exchanged paintings we had made several hours previously, ending our time with them — aside from the emotional parting speeches and embraces. Most of the students were done with their paintings within an hour, setting them up to dry and going to play with the children or nap. The women spent hours on their paintings, often tracing invisible pictures into the canvas with their fingers before even picking up a paintbrush. Almost every single one of them found room to paint a flower.