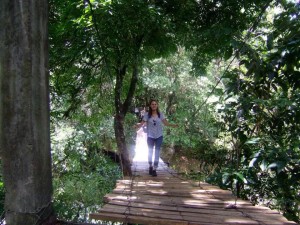 I meandered down steps to an amphitheater, overlooking layers of trees and valleys in the Chiapas rainforest, clouds swimming overhead, and sat with the community of Acteal in their memorial mass. The soft beauty and gentle breeze seemed out of place as the priest led a service, to which foreigners doing social justice projects all over Chiapas are invited. Afterward, we all went into the crypt below and witnessed the community’s expression of grief. The indigenous woman next to me cried softly and quietly behind her gossamer headscarf. She prayed in Tzotzil, with stifled, delicate words that yearned for a listener but did not beg for a response. Her silent cry drew me in; I wanted to comfort her but I knew I could not and should not, and that made me uneasy. It was an uneasiness I thought appropriate – I could live with it. Her breathing became deeper and heavier, and her sobs more distressed, but her words remained hopeful and sincere.

I was almost envious of how she composed herself within her sadness. She did not dramatize her struggle; she acknowledged it as a serious part of her life, and she did not seem ashamed or guilty about sharing it so intimately with me, a stranger. I did not know why I felt so strongly about a woman I did not know, a woman who had not told me anything of her story, who did not speak my language. For the past sixteen years, on the 22nd of each month, her community has commemorated those who were killed in a massacre of 45 women and children by paramilitaries in 1997, and shared their continuing grief. This woman’s openness did not burden me, and my empathy grew because of it.

Yet I was confused and in a way uncomfortable with myself. I was caught up in finding a way to have a natural, authentic public expression of what is most private to me. Perhaps I simply wished I could share my deeper feelings as the woman did, as her community did. But I also wanted to communicate to her, to all of them, that I was listening. I wanted the woman and her community to feel as close to me as I did to them, and this made me feel vulnerable. Part of my difficulty in expressing hard and troubling things publicly has had to do with a fear of being exposed to those around me. I appreciated being in the presence of the indigenous people during their prayer even more, because they had rendered themselves vulnerable to me. I felt comfortable with them because their culture created an environment where they were all equally exposed, which made my uneasiness feel normal and natural. Their sense of communal openness brings them closer, because it testifies to a kind of trust shared by the community.

Now that I’m home, I seek this same closeness as a songwriter and performer. I want to recreate the sense of mutual exposure, honesty, and trust with my audience – whether close friends or complete strangers. Being honest with those close to me and gradually embracing what makes me feel vulnerable helps me to blur the line between my public and private self, so that I can have deeper and more genuine connections.

My experience at Acteal has helped me see that the kind of authentic human connection I want takes a certain opening up of the self. You don’t need to know another’s whole story for this type of connection, you just need to be there with them—in mourning the loss of a loved one or in singing your own song about disappointment and pain. And the willingness to show yourself to another person comes along with a willingness to trust, to sympathize, and to love.