One World, Many Worlds 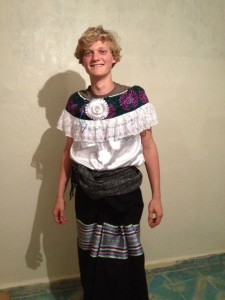 For about a week before the Chiapas trip I felt more nervous than excited. There’s no question I was looking forward to it, but the anticipation of possible illness had me in a strange mood.  Even after hours of air travel, I looked out the window at the patchy clouds and jungle and thought, “What am I getting myself into?”  It wasn’t that I regretted going, I just didn’t know what to expect.  Mickey hadn’t told us much, and I was concerned that I’d be distracted by illness and would not be able to appreciate or learn all I could from the trip.  As it turns out, I did get sick, but when I think back on the trip, sitting on the toilet is far from what comes to mind.

What I think of first is the physical beauty.  An old Spanish city, in a “bowl” on a mountaintop.  Every morning clouds filled the depression, and the sun would slowly burn them off and reveal the lush green of the mountains.  We got lost almost every time we left Junax (where we stayed), because there were not only similar mountains in every direction, but also two very similar churches, both up flights of stairs, on two sides of the city.  We would become disoriented in the maze of bright stone and stucco cubes, and then somehow find a piece of graffiti, or a shop we’d seen before, and make our way back to the hostel.  Our drives through the country left me wonderstruck.  Cornfields rose up the sides of steep mountains.  Cattle, pigs, and dogs wandered by the side of the road.  Every so often the jungle would thin and expose a view of the valley below.  It was incredible.  But as wonderful as all of this was, we didn’t ponder about the landscape as we did the philosophy.

Two ideas seemed to dominate our discussions.  The first was that we, American students, and they, Mexican farmers, Zapatistas, and textile workers, inhabit profoundly different worlds.  The second idea was the need to create a “world in which other worlds fit.”

People in my world generally pursue status, and even more monetary wealth. We come from a giant sprawl of a city, in the consumer capital of the world; they live in tiny, community-oriented mountain communities.  In their world, the emphasis is on preserving their culture and way of life.  They have a system of government designed to ensure each member of their community an equal status, while each contributes to serving as a community leader.  Every village we visited was clearly operating in a different world from our own.

A “world in which other worlds fit” was harder to find, but I found it at the Encuentro in San Cristobal, over our last two days in Chiapas.  It was a combination meeting/party with the Women of Corn in Resistance.  Because it was not held in their villages, or in our home city, we were not in their world and they were not in ours.  As a result, we were able to create our own little world in which each of our respective worlds fit.  The games we played to get to know one another facilitated this process.  Breaking down language barriers and learning each other’s names brought us together, and pretty soon we were laughing and singing and eating and giving each other advice.  Our worlds had somehow melded.  It was remarkable what we were able to create in such a short time.  I felt completely comfortable with a group of people I’d met just a day before.  We reached a level of intimacy that astonished me; when I strained my leg, it seemed natural that a stranger, one of the an indigenous women, offered me a massage.

When we performed our skits, I was able to see quite clearly that we were at once in different worlds and the same world.  We came to understood (and act out) part of their daily lives and they did the same with ours.  We dressed as women and they dressed as men.  They laughed at us being them, and we laughed at them being us.  It got me thinking simple but important thoughts: about how great it would be if a community could be created in which all worlds would fit in this way, and how many of the world’s problems could be dealt with if everyone acted in such a caring way towards everyone else.

Soon it was time to go, and we exchanged final goodbyes.  This was when “our world within a world” shone brightest.  Our worlds hadn’t separated yet, and when we tearfully expressed concerns about what we’d be leaving behind in Chiapas and what difficulties we’d be facing at home, they gave us advice.  They said, “There is a solution to every problem, an answer to every question.”  Thinking about this advice, I realized that our concerns about finding a similar community in Los Angeles were unwarranted.  Los Angeles isn’t an entirely uncaring place; it’s just large.  It is possible to build a world in which other worlds fit – “another world is possible” (Zapatista slogan).  We just need to try.