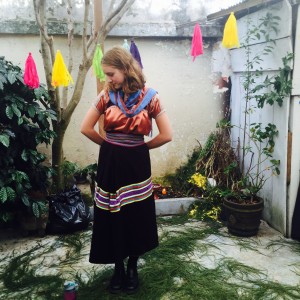 A thin ray of sunlight snuck through a small crack in one of the wood planks, as if its intention was to wake me.  But I was already awake with nervous anticipation.  I was part of an Oakwood student delegation to Chiapas, Mexico, visiting for two weeks with Zapatista leaders and indigenous women whose artisan goods we’d been selling in Los Angeles since I was a tenth grader.

We had received approval from the heads of the caracol, one of five Zapatista political centers, to spend the night in one of their dorms and meet later with the Junta.  As we arrived, sheets of rain poured down onto the meager tin roofs.  I spent the next couple of hours trying to fall asleep, listening to drops of rain. Each sounded like a bullet: ping, ping, ping.  The repetition underscored my mounting anxiety and each boom of thunder shook me from the inside out.  I found myself laughing uneasily while my sick stomach gurgled.  I awoke with rays of sun to the reality of my surroundings: a cold cement floor in a small encampment somewhere in the jungle bordering Guatemala.  I sat miserably sick with a stomach ailment common to travelers in the area, with only a hole for a toilet.  I didn’t know the indigenous language and I felt uncharacteristically alone.  That day, nerves had undone me.

As my health improved, I walked around the caracol and pushed myself to speak with Zapatista men and women, using my halting Spanish.  They were so patient and warm, like old relatives.  Their weathered appearances reflected their stories, the harsh realities of their lives.  They had chosen to leave their homes and create a new life, developing communities in protest to the way the government had treated them.  I was struck by their pride and determination in the face of extreme poverty: they had joined the Zapatista movement and established autonomous communities completely independent of the Mexican government.

I heard my name called, and I was asked to enter the Junta’s room alone.  The humidity, thick and sticky, had drenched me, and my stomach started to turn again.  The first student to enter the dark, windowless room, I saw a man wearing a black woolen ski mask—incredible in that heat—sitting alone at a rickety table.  Even if there had been no language barrier, I would have doubted my ability to communicate with this menacing-looking stranger.  As I slowly approached, my heart raced.  When he extended his hand and motioned for me to sign my name on a piece of paper (the Junta tracks American visitors), my hand shook and I couldn’t make it stop; but then I looked up and met his gaze.  Somehow, through the mask, I saw warmth in the wrinkling corners of his eyes.  It was clear that he was smiling.  There was an immediate, unspoken connection.  “Bienvenida,” he said, and began to inquire about why I was there.  “In support of you,” I replied.  He explained that Zapatistas wear masks because they believe the Mexican government does not view them fully as people.  They have collectively elected to mask themselves until their situation changes.  There was so much more to say, but I thought that was enough, and it was.

A month after I returned home, I hosted a Chiapas House Party to sell the women’s artisan goods.  I became quiet as I unpacked the handmade purses, scarves and tablecloths.  The paper tags that hung from each piece fluttered like pages of a storybook.  Each handwritten tag shared the history of the woman who had made the piece and how many hours it took her to complete the item.  I saw an image of each woman, and I remembered their stories.  I hope to wake up on that cold cement floor again next year, less afraid, and waiting to talk with those women again.