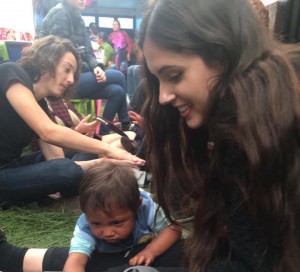 I had been sitting for three hours in overpowering humidity on a dirt road in the jungles of Chiapas, Mexico.  Our student group was waiting for the Zapatista council to agree to sit down with us and discuss its work.  When the council members finally greeted us, they didn’t apologize for the wait.  I tried to suppress my resentment about the three hours; I had a kind of vanity about how I would have handled it.  And I was pretty sure that I would soon bestow on them my Western ideas about organization and civility.  It took a second trip to Chiapas this past summer to see how profoundly mistaken I was.

I first learned about Chiapas because my classmates and I had been selling the artisan work of its indigenous women to prosperous Californians, returning the proceeds to the women.  Two summers ago, I finally went to Chiapas to meet them.  At first I was overwhelmed by the strangeness of a place where plumbing was a luxury and time seemed to be merely a concept.  My reaction – defense, really – was detachment.  I was emotionally throttled, afraid I wasn’t up to the challenges of the trip.

The challenges were daunting.  We attended a monthly mass mourning the loss of 45 women and children in neighboring Acteal – half the population of that village – massacred in 1997 by a paramilitary group.  We sat among these strangers as they wept for their loved ones.  I was terrified; I feared I’d never be able to understand these people and their culture, to experience their difficulties from the inside.  How could I?  Even in a desolate, impoverished village, thousands of miles away from home, I knew I could leave when I wanted.

Before this first trip, my friends and family had gone on and on about my “humanitarianism.”  In fact, though, I didn’t deserve the praise.  I was too much in a “white savior” frame of mind.  In the end, of course, I “saved” no one – in part because the very idea was wrong, and in part because I remained so reticent, so debilitated by self-consciousness.

I decided to return to Chiapas the following summer – perhaps out of frustration with my experience that first summer, perhaps because I hoped the experience this time would feel less alien.  I tried to divest myself of a sympathy that was sentimental at best.  Early on, our group met with a local community organizer, who helped me confront those feelings.  He told all of us to get over the fantasy that we could save them with our two-week visits and our pity. At best, we were treating surface wounds.

He was overstating the case, but we needed to understand the importance of autonomy in their world.  I sat in a 115-degree room, face-to-face with a group of indigenous men and women wearing black ski masks, a symbol of their feelings of invisibility to the official Mexican world.  They talked about the dignity they felt sitting in this “oven” rather than in air-conditioned offices like those of the “bad government,” and I realized that they didn’t see themselves as victims of a repressive world or of their poverty.  But even as my sympathy deepened into something approaching empathy, I recognized the limitations of my role there.

After two summers in Chiapas, I’m still trying to figure out what place, if any, I could have in their society.  I do know, though, that the first step is learning and respecting the rhythms of that society, its moral assumptions, and the dignity of people who, given a little freedom, will discover for themselves what their talents are.  Perhaps the most that outsiders like us can do is help them create a safe, equitable place, and to provide access to the resources they need to fully take advantage of their freedom.