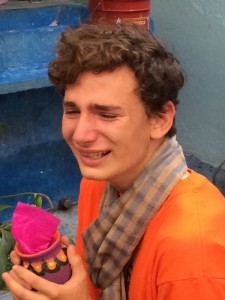 It’s hard for me to put words to my experience in Chiapas because to some extent I’m still taking it in, internalizing my experiences and trying to draw from them lessons that I can apply to my life.  Maybe, though, this isn’t the point.  As Mickey often said to us, “This trip is not about you. It’s about the people and their struggle.”

When I stood up to introduce us in front of the Junta de Buen Gobierno, the governing body of the Roberto Barrios Caracol, I said that we were there to try to understand the struggle of the Zapatistas, but I hadn’t even internalized it myself.  If someone had told me at the beginning of the trip that I was treating it like touristry, I would have been defiant and maybe even offended, but I hadn’t realized that on some deep level I was.  I saw the people as a sum of their struggles; I was amazed by the things that they had endured and not by their strength to endure them; I saw them as the happiness that they exuded rather than their resilience, their power and their sheer will to survive and better their world.  Eventually I realized that in Chiapas I had seen those who struggle but never seen the struggle itself, and that was maybe the deepest form of tourism: one where you could almost convince yourself that you in some way had helped, had done something, had enacted change, but where in reality all you had done was witness.  Maybe this was furthered by the fact that this trip was the first serious involvement I’d had with this program.  It won’t be the last.

At each turn, the people we met, if only briefly, blew my mind: the things achieved, the hard-earned victories, the survival of the hardships that had plagued people since their birth.  My awe was deepened by my own feelings of guilt for having done very little with my privilege, but before long I realized that that was a symptom of pride.  Zapatismo is not relatively sophisticated and forward-thinking given its contingent of thousands of largely uneducated and often illiterate farmers, laborers and craftsmen and women; that, as Mickey often reminded us, was our inset prejudice telling us that the impoverished could not be wise and intellectual. Zapatismo is not relatively impressive and powerful given how peaceful, people-driven, and staunchly, purely democratic they are, given how their primary figure of leadership is a shadow who communicates in poetry and truth, given how their centers of resistance change leaders as often as every few weeks; that is prejudice telling us that change on a large scale cannot be achieved without violence and sweeping imperialism, that consistency is the only way for a leadership to maintain control, and that people must be lead to be effective.  These, to me, now seem like biases emblematic of a subconscious but pervasive American mindset.  This is what about Zapatismo most deeply affected my perceptions of grassroots movements.  Zapatismo is not impressive just in the haze of the bias and prejudice that I’ve accumulated as the result of a privileged and oblivious existence, it’s impressive on its own.  Zapatismo is wise.  Zapatismo is impressive.  Zapatismo is powerful.  I could say that Zapatismo changed my perception of the concept of a grassroots movement, but I think it would be more accurate to say that Zapatismo forged it.

In different ways, people almost always said to us, “It must have been very expensive for you to come here; we certainly could not have come to you.  Thank you for taking your time and money to come to us and to understand our struggle.  We often feel that we as a movement are not heard, but you have shown us otherwise.”  This seemed odd coming from them; after all, I thought of them as the givers and us as those who received the gifts.  It was their food, their time, their happiness that we shared and that they gave to us as we stayed with them.  I was always amazed that they thanked us. It’s the kind of amazement that evokes a vague but unshakeable sense of shame and inward anger, and at the same time reminds you not to make the experience about you– to share in their happiness, not to envy it.  It is, after all, a gift.  To push away this gift with the poor excuse that you don’t deserve it is mutually destructive.

I still struggle to make sense of any of it. It’s hard to put concrete, articulable thought to the pure, raw emotion that I felt.  I found it difficult to even look into the eyes of these people who had given us so much and still were so generous in spirit as to thank us.  That, too, is shame talking — to make sadness of the happiness I’ve been given is selfish and blind.  So for now, I continue to try to smile when I remember Chiapas.  If I don’t, I think I might cry.  Again.