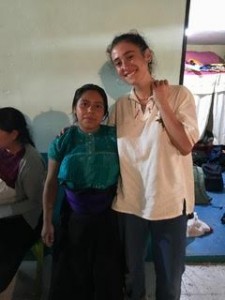 Trying to encourage me to take part in the annual Chiapas trip, friends asked me what I was worried about.  It was a combination of things, a hesitation that was hard to put into words; but nonetheless I wanted to take part in an experience I knew would ultimately be enriching.  It wasn’t until the plane touched down and we began flooding into the city that the reasoning behind my anxiety began to surface.

On the day of our arrival we had a leisurely lunch with one of the many remarkable people we would meet over the course of the trip.  I was restless already.  The sun peeked in and out of the clouds between spurts of gentle rain as my classmates wandered through the colorful space, a space that belonged to an artist in rebellion, the walls dressed in her paintings, reflecting the culture that had inspired her.

I sat outside in the small courtyard, waiting for a task to be provided.  I had seen all of the artwork already.  Yes, I agreed with my classmates, they are very beautiful.  But everyone continued to do what they were doing, and I wondered how they were so taken up with it all, and quickly grew upset at them — the same kind of anger I often have when someone asks a stupid question during class, or when my ability to do something is overlooked or disregarded.  I wasn’t jealous or embarrassed that I didn’t share the capability to bind so quickly; I just didn’t think it was possible

In my journal I wrote: I hope other people relate to the feeling of looking at a room of people and wondering how genuine they are.  And then I thought about it and added: but I don’t want anyone to question my ability to be genuine.

A classic pair of contradictory traits, like being impulsive and regretful (which I am).  Only these traits were worse, because insecurity and self-assurance aren’t products of each other, they just exist inside of you at different times, or at the same time, like at that moment.

I couldn’t deny the judgment I wore over my eyes.  It wasn’t comfortable like contacts, although it did provided the illusion that I could see clearly: through them everything was stupid except for what I believed.  And sometimes the judging would make me feel a little sick or crazy inside, thinking no one would ever understand me because of how I see, but really, I wanted the capability to bind, if it existed and if it was learnable.  On that first day in Chiapas, twiddling my thumbs by a coop of chickens that I would have rather eaten than dealt with, I didn’t think it was either.

Ten minutes later it started raining again, and I got out of my chair and went back inside, where my peers continued to look at the same pictures they had seen before, then move on and pick up the same small pieces of artisan work they had picked up before.  Some had fallen into this strange pattern of time easily; I saw them sharing moments of appreciation, and I was envious.  As I internally began to map out how I was to be occupied for the next nine days, the woman behind the art announced that she was going to speak.

We were, all of us, profoundly moved.  Her words were more than entertainment and “human interest”; they were an offering of serious thought, more useful than filling time with pretty language.

During the next block of time, where no instruction or direction was provided for us, I sat and thought about what she had said.  For the first time I practiced acceptance instead of channeling impulses of judgement and competition, a significant lesson worth writing down in a journal that would soon be filled with voices and mechanisms revolving around how to sprout above a social  system which puts such a chaotic and concrete roof over us, blocking our heads from poking through.

Acceptance was the first unspoken law, and while we all processed what it was to accept in different ways, the act itself opened us up to what was to come.  I started to notice the same words echoed by men and women across Chiapas, repeating them as if they were highlighting answers lost in a page full of questions.  Words that seem shallow in America, especially in comparison to the oceans of meaning they contain when spoken by a woman in resistance, or a community suffering loss.

I don’t know what gave me the ability to finish the trip with such a radically different outlook on my own community.  Maybe it came in realizing that judgment is painful and to be judged is painful too.  Maybe it came in trying to preserve my own dignity by listening to those around me for once, without glasses of judgement, and taking it in purely as the perspective of another, instead of comparing it to my own.

My dignity is fine now, but it wasn’t before. Dignity cannot be maintained by itself: other people have to recognize your dignity. Respect is a big part of learning. You can tell when a person respects you, and usually it validates how you feel a little more, because another human being regards the craziness going on in your head as a reality, or even correct.

By the first evening, only hours after my afternoon of judgment, I looked down a long table filled with faces that pass me at school every day, and I felt love and dignity. The love came from my heart, but the dignity came from knowing that my face was present at the table too. Taking shelter in a community doesn’t necessarily make you weaker, just as independence doesn’t make you stronger. For the rest of the trip I moved with my community, I listened to the questions they asked and the answers they were given, I noticed that we all crossed over in our beliefs, and I accepted it when my own strayed.

Our communities aren’t as consistent as the ones we observed in and around the city of San Cristobal.  Instead of living our entire lives together, our priorities are always changing; a friend can become a competitor at any point along the way. I love winning, but playing the game can be lonely and unfulfilling.

When I was first told to preserve dignity, walk in the spirit of your community I smirked. But after putting it into practice, I found that it works like a charm, so I took it as my charm.