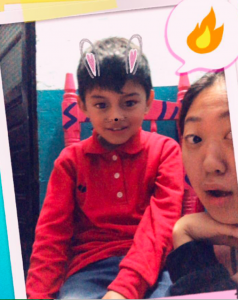 But at a longer glance, it’s hard not to notice the glaring details out of place in such a picturesque city.  Past the soulful musicians are rows of people huddled on the edges of the sidewalks.  Small children latch onto you, insistently begging for money.  The vibrant colors of the city are only a distraction from the silent, piercing eyes that follow you whenever you uncomfortably mutter, “No, gracias,” to a little girl desperately selling a basketful of artisan goods.

It would be easier to simply regard these discrepancies as inevitable.  Capitalism and all its inequalities are so ingrained in our privileged Los Angeles bubble, and as the benefactors of such a system it’s difficult to imagine an alternative.  It would be easier, also, to call Oakwood’s annual trip just another “community service project.”  It would be far less complicated to assign our delegation of students to a place in the list of “feel-good” Chiapas transactions that would somehow attempt to ease the guilt behind the inequality prevalent in Chiapas.

But it isn’t simple.  The Chiapas trip cannot be reduced to a list of quantifiable acts of service, nor can it be distilled into a purely numerical calculation of how much money we have contributed.  It was not a community service trip, but an experience we were privileged to have, in which our group of foreigners entered the region of Chiapas, were welcomed by its loving community, and exited with a powerful sense of something deeper –- a tangible understanding of the EZLN’s mission, and a more profound understanding of love.  We were gifted a truly precious experience: imagining a different world.

Just as the Chiapas trip cannot be neatly packaged into an itinerary, Chiapas itself isn’t a place that can be viewed through the simple lens of its tourist attractions or charity postcards.  Rather, our trip gave us the special privilege of immersing ourselves in something radically different, something special.  The mission of the Zapatista movement and work of the women we spent time with in Chiapas weren’t fantasies based on a magical spell in this region, but very much grounded in the reality of their difficult experiences, and in the strength of their persistence in crafting a more democratic and just future.  It was an unbreakable, somewhat indescribable combination of pain, passion, and beautiful ambitions.

The closest I can come to describing this “something special” which Chiapas provided is through the powerful words of Julio, our Chiapas driver, poet, and Zapatista activist. “How great to hear sounds all around the world and recognize that they are ours as well — there is room for all of them. It fits,” he told us, pointing to how open the world might strive to be.  Rather than the common trope of social justice activism that reinforces the same structures of oppression and power but just swaps out the players, the Zapatista movement offers a different perspective on how we can even begin to approach the issue of change.  The deep diversity of the human experience is the “sounds all around the world” which we have ownership over — to appreciate and celebrate within the complicated yet beautiful web of human connections.  The Zapatistas are not looking to seize power or a comfortable seat at the top of the hierarchy.  Instead they are working towards a far deeper goal of dismantling the system of capitalism that has corrupted their governments and their businesses.  Through unique perspectives, such as embracing failures as lessons for the community, or community-based methods of education, the Zapatistas are reshaping their society to become more free, more representative, and more loving.

The structure of CIDECI — a radical school for indigenous people on the outskirts of San Cristobal — illustrates how this new perspective of community and support can be achieved. With a very simple application process – nothing is required other than a letter of recommendation from the student’s community — CIDECI attracts qualified applicants from all over Chiapas who are eager to learn, and most importantly eager to improve life in their own communities.  Rather than limit the influence of their classes on woodworking, typing, music, auto work, etc., within the colorful gates of CIDECI, the emphasis is on students bringing back the skills they’ve learned to their home communities, so that its work is not again the story of capitalism’s haves and have nots, but rather the continuous and persistent effort to integrate and uplift the entire community –- together.

This sentiment is echoed in everything the Zapatista movement does, and especially present in the National Indigenous Council’s statement on how essential it is for progress to “start below and to the left,” referencing the need for progress to be inclusive of people of all backgrounds, and to have heart.  “What matters is not how much strength we have but how much heart we have.”  Although the Zapatistas express powerful strength and determination in the courage with which they oppose the government and in their laborious work, offering their expertise and soul for the movement, what is most striking to me are their open hearts. It is their hearts that keep them grounded in the goals of the movement, making sure that corruption in politics and power does not affect them.  Whatever power they gain is reflected back to the people and their needs — a unified fight for self-empowerment and justice.

It’s common to think that such qualities — strength, power, resilience — are results of struggles, as if it is necessary to undergo injustice in order to unlock these character traits. However, the Zapatistas, especially in the revealing documentaries they make, remind us that the violence, subjugation, and oppression the Mexican government inflicts is needless and fueled by greed.  The Zapatistas always had their strength and courage — this wasn’t a result of the senseless injustice they suffered, but rather a conscious choice for themselves to embody these qualities in activism.  Although “the government is trying to kill us [the indigenous people of Chiapas] with pure politics,” the Zapatistas have something far more powerful as their weapon: their heart leads the way to powerful and conscious change.

Jorge Santiago of Musson de Jtatik offers lasting words of hope for the movement.  He says that we will never be fully satisfied with the human experience, but during our life the greatest chance of happiness is for us to continue walking on the good path.  The path and future of Chiapas is uncertain.  It is rich and poor, its buildings are beautiful and distressed, and its people are vulnerable and strong.  But what is certain is about Chiapas is the existence of a space that incorporates all: the whimsical banners in the sky, the stray dogs on the streets, the men, women, and children of the communities.  A future for everyone and everything, based on overwhelming and profound heart.