Home › School Project › The Women >> › Women of Corn in Resistance

Women of Corn in Resistance

The Women of Corn in Resistance are a federation of cooperatives made up of 70 women from cooperatives in Altamirano Chenalhó, Comitám, San Andres Larrainza, Margaritas, Ocosingo, San Cristobal las Casas, San Juan Chamula, Yajalon, Zinacantan. 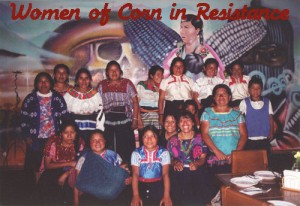 The Women of Corn in Resistance group was formed by a little over 90 women from different places in the state of Chiapas, who had in common the need to satisfy their elemental needs for things such as food, healthy places to live, education, and to defend and maintain the good customs of their ancestor Mayans.

Girls, boys, women, and in general the whole population gets ill very frequently because of the lack of public services and well-balanced diets. There is also a lack of children who attend school, and 90% of the women do not know how to read or write. 70% of the women also do not speak Spanish.

Because of all those things that we have in common, we formed in 1999 so that together we can gain strength and can be able to fight together, so that we will step by step walk towards a life that is more dignified and just.

We have organized a cooperative society in which we have an administrative counselor, with whose help we have been able to gain more and more organization.

We know that working in a collective is a challenge that involves many things. And because of that we believe that the effort of the cooperative society of Women of Corn in Resistance is very important, since in five years we have been able to see beyond our differences and have learned to respect each other and ourselves, achieving a cooperative where we fight for a common good. Which is to have a more dignified life for ourselves and our families.

The way there has not always been easy, and we have had to learn little by little how to dialogue and to come to an accord in a democratic was, searching for equality in every sense, in which we have formed the collective.

We have common principles: forming in an integral manner, developing abilities in ourselves in everything necessary to better the quality of our artistry but still keeping the essence of our Mayan culture, gaining everyone’s participation, everyone working the same load, valuing ourselves as women knowing that we have rights that no one can violate. And we know that as women we can participate and give our say in the community, in the home, and in the group.

In these years of struggle we have been able to better our artistry, so that it has a magnificent quality.

We organize ourselves so that we can sell our artistry in different places, and in that way apply ourselves to the different duties and attention that this work needs.

We have systems of loans so that we can help ourselves in the urgent times or in the moments where we need something to better our work.

And now we keep having great challenges:

Being able to compete with the great monster of the neoliberal market, in which the collective work doesn’t matter and which is continually fomenting individualism.

That of continually improving our abilities, all the women of the collective, so that our work can be of the best quality every day.

Being able to keep in contact with the market, since it is more solid, in which others can value and recognize our work and can give us a just pay for it.

And that of continuing to keep in contact with the help of the students, family and friends in Los Angeles, CA, and of other places so that we can commercialize our artistries.

The Women of Corn in Resistance