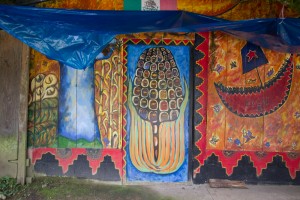 The Xulum Chon Co-op came into existence in 2002 and was legally established on February 20, 2001. There are 48 members in two municipalities – San Juan de la Libertad and San Andrés Larainzar.

Our participation in the Co-op plays an important part when it comes to stimulating our hearts and giving us the strength to continue being a part of the processes in our communities and our regions.

Together we seek out ways to export and to improve our commercial system of production in order to be compensated in a fair way for our textile crafts.

The Co-op society is administered by Tzotzil women in a collective work environment.
Our work products are made by the use of a loom as well as our hands; our embroidery uses the cross-stitch inherited from our Maya ancestors.

All foreign and domestic visitors will be able to admire the variety of crafts that come from our Co-op, which make up part of our identity as Tzotzil weavers and embroiderers.

The Nichim Rosas Co-op came into existence in 2002 and is made up of 38 artisan Tzetzal women. These women come from two municipalities in the southern part of Chiapas – the Amatenango del Valle Chiapas municipality and the Carranza Chiapas municipality. They belong to the communities of San Caralampio, Aguacatenango, Puerto San Lazaro and La Grandeza. Before we formed our Co-op, we would sell our clothing one article at a time in San Cristobal. They would pay us rock-bottom prices. There were also some individuals who would help find a market.

But our greatest fear stems from the economic and social situations that we face in the communities where we live. That made us change and take action in order to establish our Co-op.

Our situation is getting more and more difficult, poverty continues and our communities are becoming marginalized without getting any help from the government.

Today we find ourselves in a different situation because we can now count on our Co-op and have developed an awareness of working together and finding a market for our products that will pay us a fair price.

Our crafts are part of the culture of the Mayan cities. We use the Rococo style of embroidery when we make our blankets. These are made by hand and are available in a variety of designs. We have inherited all of this from our ancestors. Our crafts represent a source of income for our families.

Cooperative Artisan Society of Women for Dignity S.C.L. the Highlands of Chiapas

We are representatives and board members of the organization of artisan women of the hills of Chiapas. Our organization is called Cooperative Artisan Society of Women for Dignity. It is presently comprised of more than 600 artisan women from four municipalities and forty communities of the hills of Chiapas. Our Co-op was established on March 1st and came into existence on April 15th, 1997. It originated because of our need, as women, to sell our crafts. It is one of our main sources of income. It helps our indigenous communities located in the hills of Chiapas survive.

The only road we have available is that of survival and resistance.”

Our communities’ economic and social situation is becoming increasingly more difficult. Each day there is more poverty, misery, illness and malnutrition amongst our children and our elderly. All of us, women as well as men, have no soil to work and we do not have any other means of support. We have survived thanks to our effort and sacrifice. However, the conflict with which we live in Chiapas and in Mexico, as well as our economic situation, is getting worse. The only road we have available is that of survival and resistance. We have to organize our women to sell our crafts and together, men, women, young and old will succeed.

Our crafts are part of the culture of the Mayan pueblos. Our ancestors considered crafts an important part of our culture. Crafts vary depending on the village and its tradition. Crafts identify the town or municipality to which men and women belong.

Since hundreds of years ago, women and indigenous towns have had their own culture, language, and attire. Therefore, men and women worked on crafts for their personal use and their families’ personal use. But since the Spaniards’ arrival into Mexico and the invasion of other powerful countries, Spain destroyed the culture and traditions of the indigenous people. They forced their culture and other customs that did not favor our indigenous villages.

From the very beginning, the Spanish forced their culture and laws upon the indigenous people and subjected them to slavery. They stole the riches of the Mayan villages and forced the indigenous people to live in humiliation and submission. They imposed their customs and cultures upon us and these often prove harmful to our people. However, our culture is still alive and is gaining strength.

Although the arrival of the Spanish was marked by violence, our indigenous people could not be destroyed. Their influence can still be seen in their crafts.

Women have been making crafts from way back. Earlier, crafts were made for personal use but now, due to the poverty and misery that we have endured since many years ago, we have been making crafts in order to sell them. Production has increased little by little because crafts are considered a source of income for the villages. Women are now making their crafts in order to sell them because there is no other way to earn money to survive and keep us from starving.

We had the need to form a Co-op because we were always selling our crafts in the streets at a very low price. Women can now sell their crafts without a middle person. We have paved the way for a domestic and international market that enables us to sell these crafts legally.