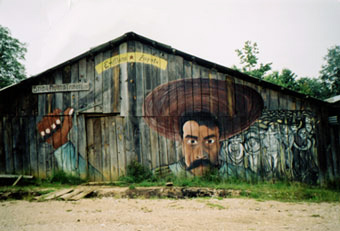 “Yalib Jha” (Waterfall) is the name of the indigenous women’s cooperative that is in resistance in Roberto Barrios. This Tzeltal community is located in the northern zone of the Lacandon Jungle, near Palenque. It is part of the autonomous municipality called “El Trabajo,” or “Work.”

The women joined together in 1990 and organized to work as a collective, and they began doing collective work in the fields. In 1999 they began to make crafts so that they could make an economic contribution to their families and they could better the conditions of extreme poverty in which they live, a consequence of the low intensity war that they have suffered since 1994. 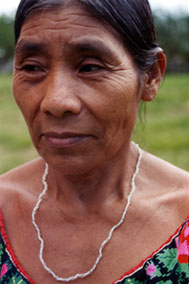 Today there are approximately 50 women in the group. The women’s responsibilities include taking care of the house, watching the kids, working with their husbands in the fields, and in their spare time they are dedicated to their crafts and artwork. Their artwork, with its designs and its colors, comes from the Tzeltal tradition. Each piece is unique, and the embroidering takes hours and hours of work.

This work comes from the desire to continue struggling and resisting for a new future for their children.